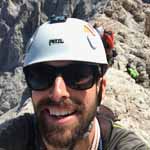 I grew up in London but spent three years living in Romania as a child where I learnt to ski and had my first experience of the mountains. I couldn’t get enough of being in the mountain and especially the snow. As I carried on skiing and eventually turning to snowboarding, I joined the snowsports team at University while studying Politics and International Relations. At the end of my degree I had much more interest in teaching winter sports than entering politics. One winter season turned into seven and I eventually moved up to Scotland so I could gain more summer qualifications spend all year in the mountains.

Starting out as a snowboarder I’ve since found so many other way to enjoy the mountains; on a bike, on the end of the rope or just going on a big adventure with a heavy bag.

North West Highlands where I live has everything. Beautiful beaches set against dramatic mountains and places to climb, bike, walk and swim.

Not a lot of people know

I used to play the trumpet for about 8 years as a child.

“Starting out as a snowboarder I’ve since found so many other way to enjoy the mountains; on a bike, on the end of the rope or just going on a big adventure with a heavy bag.”

Been working in the outdoor industry for about 10 years. Since moving to Scotland 7 years ago I’ve worked almost entirely as an outdoor instructor from doing centre work, to white water activities and a range of freelance work. I’ve lived in Aviemore, Gairloch/Torridon and Glasgow so the areas I know best are the Northern Cairngorms, Torridon, Kintail, Assynt, Fort William, Glen Coe, Loch Lomond and some parts of the Southern Cairngorms around Braemar. I have got to know Raasay quite well as well as Harris and Lewis having spent a full week on Harris and Lewis wild camping and exploring. I’ve also spent a bit of time exploring Skye.

Spent a week in Spain in September this year and lead a multi-pitch route up Naranje De Bulmes. Super impressive with no shortage of dramas on the way up. The rest of the trip was much more relaxed sport climbing, but not nearly as exciting.