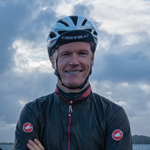 My first “proper” outdoor adventure was at 15 when I walked the West Highland Way in 1988 with a couple of friends with packs weighing more akin to the sort of load a Sherpa carries during an exped in the Himalayas – what a hoot and learning experience! Since then, I’ve spent the last 30 plus years road cycling, mountain biking, bikepacking, hiking, climbing, ski mountaineering, summit camping, and bothying in every corner of Scotland, seeking out the most remote and beautiful locations and being constantly inspired by the amazing country I live in. The enthusiasm for ‘wee adventures’ as I call them has never diminished, it’s deep-rooted with no known cure!

Road cycling, mountain biking and bikepacking are where I can usually be found these days once the snows recede. My outdoor qualifications are cycling based, both road and mountain bike which fits in nicely with my other passion – photography, mainly landscapes and also adventure travel often using a bike to get me to the locations I photograph.

When I drag myself away from Scotland I’ve skied all over Europe and North America with multiple ski touring/mountaineering adventures inside the Arctic circle in Northern Norway and also to Northern and North West Iceland – fabulous locations but if I could choose only one destination it would still be Scotland.

In July 2019 I became the first person to cycle solo, unsupported to all 96 Scottish inhabited islands in one continuous trip. The mammoth trip took 61 days, 2,631 miles of cycling, 86 ferries and 14 additional boat trips! Starting at the Mull of Galloway, the most southerly point in Scotland, I also visited the westernmost, easternmost and northernmost points of Scotland and found time to include another 21 occasionally or uninhabited islands along the way to bring the trip total to 117 islands. The highlight of which was climbing on to Out Stac, a remote skerry to the north of Unst, Shetland and is the most northerly point in Scotland/UK.

Scottish Islands –  there are around 90 inhabited islands and I’ve been fortunate enough to have visited them, plus other incredible uninhabited locations like St Kilda and Mingulay, etc, it really is a lifetime’s work to get to know the people, the landscapes, the variety of cultures, the fine details you pick up over multiple trips across many years. Every island has its own identity and distinguishing features and I love exploring and learning more about how people survive on the very edge of Europe.

If pushed to choose just one as a favourite I will duck the question and say the entire Outer Hebrides! A terrible cop-out but the entire chain of islands is a truly special place and one where I’ve spent the most time exploring. Watching a Hebridean sunset from one of the many west coast beaches at midsummer is hard to beat!

Not A Lot of People Know This

I once guided the skier who holds the current official Guinness World Record for having skied in more countries than anyone else around Scotland’s ski areas.

Myself and another Wilderness Scotland adventurer (the name has been withheld to protect the guilty!) beat Round the World adventurer Mark Beaumont’s unofficial record for cycling the entire length of the Outer Hebrides from Vatersay to the Butt of Lewis covering the 185 miles and 10 islands in 9 hrs 19 minutes (ride time)

An almost life-size photo of me appears in the Scottish National Football Museum (don’t ask!)

This will only make sense to those of you who use Strava but I managed to snatch a KOM from 2018 British National Road race champion, Connor Swift. Friends tell me he must have been using his shopping bike at the time.

“My outdoor qualifications are cycling based, both road and mountain bike which fits in nicely with my other passion – photography, mainly landscapes and also adventure travel often using a bike to get me to the locations I photograph.”

It’s hard to compare different adventures in different locations doing different activities – I tend to move on quickly and it’s always about the next adventure that I haven’t had yet! Recent adventures always stick in the mind more, so a bikepacking trip to Orkney and Shetland where I ended up getting stranded on Fair Isle, Scotland’s most remote inhabited island for seven nights probably sticks out. A truly incredible place to visit and my compensation for being stranded was getting to photograph the Northern lights or the ” Mirrie Dancers” as they are known locally on more than one evening. Amazing!

80s music – if I haven’t named the song and artist before the second line has been sung I’m usually disappointed. A sign of a misspent childhood!
Photography – I can happily chat for hours about locations, techniques, camera gear. Ask away!

I have never had such knowledgeable and experienced guides. They also were very capable at adjusting bikes.

Guides were absolutely amazing! they shared their passion and knowledge for a country that they truly love! 10 plus for Simon and Craig!