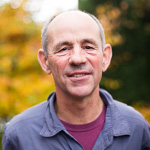 I am a native Highlander who learned to love the outdoors in my father’s footsteps in Strathspey where my forebears lived and worked the land, and I get a real buzz from sharing this fantastic part of the world with other folk.

The bulk of my working life has been spent as a family doctor in Grantown on Spey, and in addition, I have enjoyed shorter spells working throughout the Highlands and Islands, and in Africa, India, and Australasia. Alongside my medical work, I broadened my experience of the mountains with the Cairngorm Mountain Rescue Team, and I gained my Summer Mountain Leader qualification in 1997 and Trail Cycle Leader in 2014.   I have now fully retired from medicine and taken to the hills again to make up for missed time in the outdoors.

Has to be the Cairngorms.  They’re simply magnificent, offer so much throughout the year, – and they’re on my back doorstep.

I spent 3 summers in the 1970s working as an assistant keeper on some of Scotland’s lighthouses, giving me an introduction to the island and coastal wildlife, and a glimpse of a now-vanished vocation.

“The bulk of my working life has been spent as a family doctor in Grantown on Spey, and in addition, I have enjoyed shorter spells working throughout the Highlands and Islands, and in Africa, India, and Australasia. Alongside my medical work, I broadened my experience of the mountains with the Cairngorm Mountain Rescue Team, and I gained my Summer Mountain Leader qualification in 1997 and Trail Cycle Leader in 2014.   I have now fully retired from medicine and taken to the hills again to make up for missed time in the outdoors.”

I am a native Highlander who learned to love the outdoors in my father’s footsteps in Strathspey where my forebears lived and worked the land, and I get a real buzz from sharing this fantastic part of the world with other folk. The bulk of my working life has been spent as a family doctor in Grantown on Spey, and in addition I have enjoyed shorter spells working throughout the Highlands and Islands, and in Africa, India, and Australasia. Alongside my medical work I broadened my experience of the mountains with the Cairngorm Mountain Rescue Team, and I gained my Summer Mountain Leader qualification in 1997 and Trail Cycle Leader in 2014. I have now fully retired from medicine and taken to the hills again to make up for missed time in the outdoors.

Spent a spell with my family as guests of the imprisoned revolutionary leader Jimmy Stevens in his tribal village, a no-go area for westerners, on Espiritu Santo in Vanuatu.

In my mountain rescue days I had an interest in accidental hypothermia. Now I concentrate on keeping myself and my clients cosy.

Pete was a great guide. He knew the area and its plants and animals and explained what we were seeing and where we were walking very well. He judged the abilities of the group well and tailored the walks length and difficulty perfectly. His personality and humor helped the group gel together.

Pete did a great job. Planned and coordinated each day appropriately. constantly monitored the mood and capability of the group. Subject matter expert. Represented the company very well.

Petes enthusiasm for the Orkneys was magical. The way he read the groups fitness and interests meant that we were all able to find our own rhythm during the day that worked for all!

Peter is an excellent guide. Modified walks as needed. Took interest in every tour member. Vast knowledge base. Great storyteller. Really went out of his way to get us to airport on final day.

Peter Grant was a great guide. He looked after all of us and accommodated various interests and capabilities of group, He kept us so occupied that we didn't have much down time....which was okay with me. I also liked his calm low key approach, but he was clearly prepared for any eventuality.

Pete was fantastic - one of the best guides I have ever had. He went out of his way all the time to make the trip as good as possible for everyone.

Pete Grant was an excellent guide. In addition to the walking and sightseeing, I think everyone in our group was eager to learn, and Pete was a great teacher. One day we all spread out on a hillside looking for a tiny rare flower -- and would found one! He gave us a quiz the last night, covering some of the Scots vocabulary, names of neolithic structures, bird varieties we had seen, etc. It was great fun, and he clearly put in the necessary effort to make it so.

Pete was very knowledgeable about the flora and fauna of the areas--as were other members of the group. Me-- not so much! So I learned a lot, while enjoying great walks. The archaeology was fantastic.And we lucked out with guides at each site-- Pete seemed to have a nice relationship with all of them, which we benefited from.

Beyond excellent. Pete provided seamless logistical support—and he was great at making connections with our group and the local people we met. He gave us background on things as varied as Orcadian jewelers, the formation of peat, and sea brds. He was positive, energetic, and engaged.

Pete worked very hard to give us a good holiday, and was always friendly

Peter was a great guide: Very knowledgeable of the islands' history and traditions. He made a point of talking to each member of the group and drew them into conversations with others. He also encouraged people to share their knowledge and experiences of "The Great Outdoors".

Pete Grant was the best. [Please see above comments.]

Any minor detours made during the course of our travels only enhanced the overall experience.

I did not expect so much archaeological touring so I found that to be a bit much. Loved the walks though!

Pete was a fabulous guide—very knowledgable and very attentive to the group’s needs.

We were a group with diverse interests so Peter had to work hard to try and meet everyone's needs - he clearly knows lots about Orkney. We were also very fortunate to have Rachael (from Wilderness Scotland) on our trip who also worked hard to help sort things & ensure everyone had a good time. Thank you to both Peter and Rachael!

Our guide was good and clearly knew the Islands very well.

Loved Pete and would travel with him again!

We were very happy with Pete. He was very in tune with the group.

Pete was a superb guide, knowledgeable about the areas, adventurous, great conversation, and paid good attention to peoples' varying abilities. He has a good environmental ethic which he shared and encouraged without pressure. His attention to details such as wildlife we might see was excellent.

Pete Grant was excellent in every way. See previous comment.

Pete Grant was a fantastic guide and just a lovely human being! I felt from the start that we were in safe hands with Pete. Pete was a great listener and tuned in to our group very quickly and organised the itinerary accordingly. Great sense of humour so there were lots of laughs. I really liked the way Pete debriefed with the group each day. He was always happy to have feedback and input and kept us informed about the weather ( always important!) and any changes to our itinerary. And he had the knack of knowing just when we needed a coffee break! Pete had a great understanding of the Orkneys and shared wonderful stories and insights which really added so much to the trip.

See in general comments.
Pete was wonderful. He made sure our heterogeneous group would be fully happy and safe. I appreciated that extra materials such as poles, Smidge or midge nets was available for those who had not everything. Always felt safe even in the more challenging conditions we asked him to provide for us who wanted a bit more challenge,
He was on top extremely kind to all of us, making sure we would have a really good time which I definitely had!

As I said before our guide was excellent. His enthusiasm for the archaeology and wildlife of Orkney was genuine as was his concern for our welfare.

Peter was an excellent guide. He worked tirelessly to adjust the programme as necessary and to ensure we had a good time. He even devised a quiz and slideshow on our last day

Our guide was Peter Grant.He was very careful to look after everyone to the point where i relaxed,which is not a usual thing!!!!

Pete was a kind gentle spirit, determined that we all had a great time. Took the effort to get to know us all, lovely sense of humour. Was very safely conscious, especially apt given we were peeking over numerous cliffs! An absolute pleasure to have him guide us for the week...thanks Pete

Pete got the measure of the group and adapted the pace accordingly and he mixed things up nicely so we had some surprises and he was very adaptable.

the guides were so friendly, well informed, and above all very professional. they made our trip more enjoyable

Peter was great. He was able to deal with the diversity in ages of the group with a calm and gentle spirit and sense of humor It was sometimes like herding cats. His knowledge of the areas we traveled was amazing.

Peter Grant endeared us to him from the start. He truly made our trip "special" and we looked forward to being with him every day. He was wonderfully personable, had a fun, humorous side, very gentle in spirit, and overall fascinating with whom to converse.

Peter Grant was just superb! Ben and Stuart with the Rockhopper kayak trip were cheerful and managed us in some rough seas. Kyle was a very bubbly personality for archery.

Top 5 Walking Routes in the Cairngorms: Fiacaill of Coire an Lochain and Feith Buidhe

View all of Peter's stories

Exceptional Travel Experiences
From our Friends

Specialists in offering a range of adventure holidays, tours and incredible wilderness experiences. Wilderness Ireland take their clients to the most remote and beautiful regions of Ireland, all while staying at the most welcoming accommodations and delivering outstanding customer service.

The ultimate collection of European cycling holidays. BSpoke's cycling experts can tailor-make your perfect cycling holiday where you can travel at your own pace or in a group of like-minded individuals. A BSpoke Tour is all about being as restful or as adventurous as you desire.

Britain's original ski travel agency and tailor-made ski tour operator, Ski Solutions has been arranging ski holidays for over 30 years across Europe and North America. The Ski Solutions team are all skiing experts, and their wealth of knowledge and passion for the mountains will ensure you experience a truly memorable ski holiday.

Cycling for Softies is a luxury cycling tour operator providing gourmet cycling adventures in France and Italy. These are leisurely cycling tours winding through vineyards and staying in high end accommodation where the emphasis is as much on the food and wine as the cycling. Welcome to life in the easy lane.