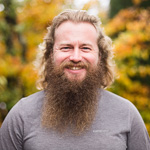 I was born and raised in Scotland and went on to serve around the world as a Scottish infantry officer.  On leaving the military I realised a long-held dream to move to the Cairngorms (and to grow a beard).  I consider myself hugely fortunate to live and work in the Highlands of Scotland and relish the opportunity to share my knowledge of it.

Walking the hills is my first love, and I’ve spent plenty of time doing it across Scotland and in the Alps, as well as Kenya, Malawi, Brunei and Belize (albeit occasionally in a slightly different context!).  Mountain biking is a more recent obsession, particularly packing enough kit on my bike for a few days’ journey into the backcountry.

In winter, I’m a ski instructor and have worked in the Alps, although I’m happiest in the more informal surrounds of Canada.  I love the simplicity offered by the routine of the mountains, and the space for thought which is generated.

I’m an avid music fan, particularly the independent Scottish scene, and love to share new discoveries which really add to the sense of place on trips. The only downside for me of living on Speyside is that the local whiskies aren’t particularly to my taste – the peatier, the better in my view so occasional pilgrimages to Islay are needed to keep up supplies.

I find myself drawn to the west coast of Scotland when journeying on foot; nights under canvas on remote peninsulas abound, but there’s nowhere to beat the Clachaig Inn in Glencoe for live music and a solid feed after a big mountain day.  On the bike I love exploring the trails around the Cairngorms; riding the seemingly endless singletrack through the Caledonian pinewoods.  Although I could be tempted away to British Columbia to ski on a powder day…

I starred in a music video which was being filmed whilst I was taking a morning dip in the sea when camping in the Inner Hebrides. It’s pretty cold after half an hour in the Atlantic, despite the Gulf Stream!

“On leaving the military I realised a long-held dream to move to the Cairngorms (and to grow a beard).  I consider myself hugely fortunate to live and work in the Highlands of Scotland, and relish the opportunity to share my knowledge of it. Walking the hills is my first love, and I’ve spent plenty of time doing it across Scotland and in the Alps, as well as Kenya, Malawi, Brunei and Belize (albeit occasionally in a slightly different context!).  Mountain biking is a more recent obsession, particularly packing enough kit on my bike for a few days’ journey into the backcountry.”

Leading people in arduous environments has been a hallmark of my career. Whilst I’ve worked across the world in terrain as diverse as jungles and deserts I’m most at home in the mountains of Scotland, where my professional skill set is complemented by a deep kinship with the land.

I suppose it depends on how you define adventure. I’ve had my fair share of adrenaline-fueled experiences but I sense that impending fatherhood is going to be something of a different adventure.

There’s certainly a few themes that I find myself drawn to whilst guiding. I love exploring the connotations of our progressive outdoor access laws, holding court on the merits of a heavily peated dram and playing tunes by incredible local musicians.

Tim Willis is the perfect ambassador for Wilderness Scotland. Exceptional performance. Always willing, well informed, anticipated issues and great sense of humour. I would book again on a trip guided by him and am thinking seriously about Orkney in February/March.

See comments on screen 4 for David Murray Greer! Dave simply made this trip special. His personality, knowledge, and love of the land are perfectly suited to complement and enhance the North Highlands trip.

David is excellent. He is knowledgable and very careful about safety

Dave was excellent in every respect - guiding the walks, driving the bus safely, giving us history of the area and the clearances, and always concerned for all members of the group.

Dave took great care of us. He explained to us in advance how weather predictions might impact the next day's itinerary, considered the interests and well being of each guest, and provided relevant historical, cultural, and geological background. His photo montage commemorating the trip will help us remember our journey for years to come. We would enthusiastically join another tour led by him.

They were the best guides we ever had as they were so engaging and helpful. They couldnt do enough for all of us. Nothing was too much trouble. Their enthusiasm and patriotism was contagious.

Dave was fantastic. We pushed it a bit hard on the first day and I was pleased that on future days we made sure we had regular rest stops and food for sustenance. He was incredibly encouraging and helped me see that its all possible!! Thank you Dave.

Dave is an absolutely exceptional guide and a genuinely lovely person! We were very fortunate to have him lead our group. He provided detailed briefings each evening, made sure everyone in the group was comfortable with the next day's itinerary, and managed the wide range of interests and abilities within the group. Some sections of the trails were challenging, particularly on the hike up Ben Hope, but he was exceedingly patient in helping everyone navigate the technical parts. During our hikes, he shared a wealth of knowledge about the history, culture, plants, and wildlife of the region, and his passion shone through at every turn. Thank you, Dave, for a truly amazing introduction to Scotland!

Dave was an excellent guide. Unfortunately we signed up for a trip that was too advanced for us.

Dave our guide was a charming, highly knowledgeable, good humoured Scot. Very professional, he ensured a safe and hugely rewarding environment in which to walk. He was a natural group leader and deserves the highest praise. He was excellent company too and very knowledgeable of Scottish history !

David was an outstanding guide. He was clearly very experienced, knowledgeable, safety conscious and professional but also very flexible and sensitive to the aspirations and ability of everyone in the group. He has a lovely way with people and was also great fun. It was added bonus that he was Scottish and had an excellent selection of Scottish folk songs and celtic rock (much better selection than Myles Farnbank's...) to play in the van.

David was an excellent guide, always good humoured and patient and taking great pains to ensure that all were included in discussions etc. It was clear that he always carefully considered plans, routes taking account of weather conditions and the abilities of all group members. He was quick to notice and respond when anyone needed a little extra support.
And he was knowledgeable, fantastic fun and great company, we couldn't have had a better guide.

Our guide made a great trip so much better with his enthusiasm, local knowledge and the great weather that he seemed to organise for us.

As mentioned already, Dave Greer was a superbly qualified and even gifted trekking team leader. His deep personal knowledge of the Cairngorms permitted daily and more frequent adjustments in calendar and routes to maximize content and minimize our risks for calamity on the trails. He never approached us as someone who "knew it all" but was eager for our own inputs and dialogue that made the days go too quickly! He earned my highest recommendation and we would very strongly attempt to work with him should we choose another WS adventure on foot or bike.

Dave Greer was fantastic: knowledgeable, sensitive to the varied needs of the group, humorous and well organized with maps and reference materials galore. We might have been startled at first when meeting this man who looked a bit like a blond Justice League Aquaman, with flowing beard, twinkling eyes and matching smile, but his first soft-spoken words let us know we were in for a treat. He was armed with enough regional history, insightful stories, geology and botany to keep our diverse group of trekkers interested. The Cairngorms came alive; the hiking pace was good.

I NEVER give feedback, it just isn't my sytle. This is my third wilderness trip and this is the first time i've given feedback - why....because our guide was so AMAZING. Dave Greer is a true Scot with wild blond hair and long beard - he looked like a highlander as he greeted us with a warm smile and hearty deep laugh at the station. He was so welcoming, inclusive and great fun. He obviously LOVES Scotland and cannot wait to tell you stories of folk law, history, plants and fauna. I agree with him that the reason that the green loch is green is because that is where the fairies come to wash! Poetry was read and it captured the essence of this wild space which just hypnotized you with its beauty. Dave knew his would happen to us all and he enjoyed guiding us through the wonderful journey. Well done Dave - you definitely sell with passion what you believe in and a jewel in Wilderness' crown!

Book a trip with Dave