Every traveller booking during our Black Friday Promotion gets a free Haglöfs jacket worth £230. Ends Nov 30th. » 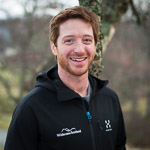 Having done ski seasons working as an instructor and resort rep in North America before university, I managed to get straight back into seasonaire life once I’d graduated. I alternated between Austria, Canada and Scotland for a couple of years, mixing between managing trip operations in resorts and instructing in various outdoor activities.

Since settling down in the Highlands in 2014 my passion for skiing has been joined by canoeing, sea kayaking and hill walking.

Although I’ve spent the last couple of years in Scotland I’m still adding to my huge list of places to try. For now though you can’t beat the Central Highlands for lochs, rivers and hills to cruise around.

After working a couple of summer seasons in the US, I became hooked on American sports and played Basketball and American Football throughout university.

“I love the journeys and expeditions that are possible in the wild places of Scotland. Coming from Warwickshire, I’ve always been keen to live in places surrounded by mountains and being based in Aviemore makes it easy to get out and explore the most remote parts of the country by foot or by boat.“