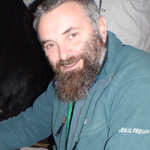 My passion for wild places began early with youthful explorations of the woods and beaches of Morayshire. My youth was spent living in Strathnaver, Sutherland. I worked alongside local crofters and helped my father in his work as water bailiff on the River Naver. I studied outdoor pursuits at Ilkley College before working at Outward Bound Ullswater. I’ve been involved in Youth Expeditions to the Yukon, Iceland and Alaska as well as a 3-year spell as a field assistant with the British Antarctic Survey at Rothera base. I live in Forres on the Moray coast, a great base for exploring the wilds of Scotland.

The Cairngorms, NW Highlands and the Moray coast for the beaches.

I once worked as the stunt coordinator on an episode of ‘The Krankies’, an iconic Scottish children’s  TV programme!

Allan Smith was an excellent guide. Extremely knowledgeable, patient & accommodating. He had to deal with hikers of varying abilities which is a challenge & difficult to satisfy the needs /wants of everyone.

Alan was very knowledgeable about the areas we hiked.

Alan was an absolute delight! He is very knowledgeable about flora and fauna, history and culture - he even read us poetry by Norman McCaig as we lunched at Loch Fionn. He was kind and patient, able to adapt to our varied needs and the changing weather with aplomb.

Alan Smith listened to the group, he is friendly and relaxed, and full of information.

Superb - thanks Alan. Both you and I need to go on a geology course - lots of interesting rocks, faults and geomorphology! I very much appreciated your ability to enable the group to walk the hills considering ability, injury and the weather - you made it seem easy.

See my earlier comment. Our guide was the BEST. All kudos. This is not mere praise: I have worked with many mountain guides and Mr. Smith is, by far, the best.

I have been fortunate to have climbed with superb guides in both North and South American. Alan was in that class. Good teacher, good listener, top-notch skills.