This trip is operated by our England team. Clicking on the link below will redirect you to the Wilderness England website. 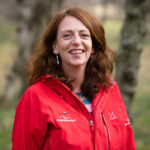 I’m an army brat so grew up all over the place, we finally settled close to Loch Lomond. I’ve tried my hand at a number of careers, retail, visual merchandising, childcare /early years worker but I was restless, maybe it was an early mid-life crisis, so I gave it all up and disappeared to New Zealand for a year, it was the best thing I ever did! That was my intro into the travel industry, I went on to become a European tour guide on my return to the Northern Hemisphere, settled in London for a few years and then got the opportunity to move over to the States with work based in Santa Monica.

That’s so hard to say as there are so many stunning places in the world! New Zealand and the States have such natural beauty and diversity and I’ve been lucky enough to travel quite a bit of the world. It took me returning home to remember how spectacular and diverse Scotland is for such a wee country and I’m still discovering it. Glencoe never fails to make me smile, whether driving through or stopping for a hike. I love the west coast, from Argyll all the way up to the north, with such dramatic scenery, rugged coastline, hundreds of islands, white sand beaches, mountains, winding roads and waterfalls. Particular favourites are around Torridon and Ullapool and the Western Isles but I change my mind all the time, it depends where I went last!

I went to a fancy dress wedding (the couple were dressed as the Flintstones) as a bride in a full-on wedding dress, top tip do not do that brides do not appreciate it even if they are dressed as Wilma Flintstone.

“It took me returning home to remember how spectacular and diverse Scotland is for such a wee country and I’m still discovering it.”